In this tutorial, You will learn how to design Kivy (Kivy Architecture) from a software engineering point of view. Then, you can understand how everything works together.

There are several building blocks consisting of the Kivy. You can get a rough idea by using the graphical summary of the Kivy architecture.

The following shows the graphical summary of the Kivy architecture. 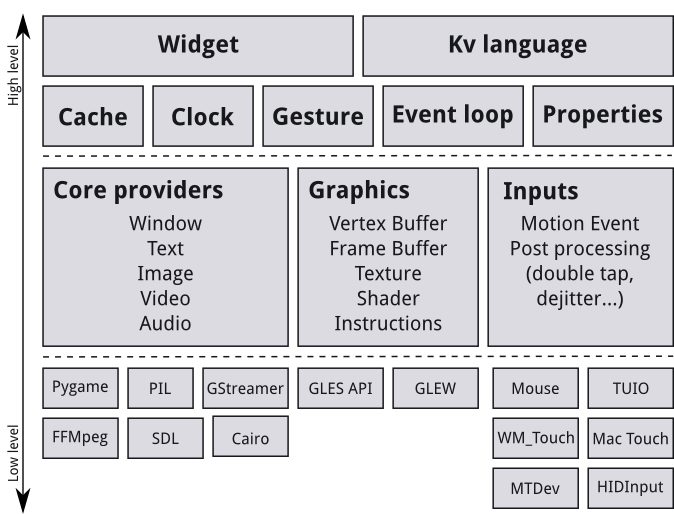 Modularity and Abstraction are some of the main ideas used to understand Kivy’s internals.

Kivy provides an abstract of core tasks such as displaying images and text, opening a window, getting images from a camera, spelling correction, playing audio, and so on. This helps to use and extend the API.

An input provider is a piece of code that helps specific input devices like TUIO,  Apple’s trackpads, a mouse emulator, etc.

To add support for a new input device, You can make a new class by reading input data from your device to transform your device into Kivy's basic events.

Kivy uses an abstraction of OpenGL for Kivy graphics API.

Kivy issues hardware-accelerated drawing commands using OpenGL on the lowest level. These OpenGL codes can be a little bit confusing for newcomers.

Therefore, Kivy provides the graphics API in which you can draw simple metaphors that are not included in OpenGL such as Canvas, Rectangle, etc.

Kivy graphics API was developed on the C level to achieve good performance. Also, all Kivy widgets use this graphics API.

Kivy graphics API has the ability to optimize the drawing commands automatically. That is a good advantage for Kivy programmers.

The following shows the commonly used features in the Kivy Core package.

Clock
The clock is used to schedule the timer events of both one-shot timers and periodic timers.

Cache
Kivy cache is used to store python objects. No need to write your own code to cache something. You can use Kivy cashe class in your programs.

There are two ways to control the cache such as Object limit and Timeout in Kivy.

Properties
You can link your widget code to the user interface description using properties classes in Kivy.

Widgets are the base building blocks of graphical user interface interfaces in Kivy. Also, You can add some functionality to your program using Kivy widgets.

File Browser, Buttons, Lists, and Sliders are some examples of Kivy widgets. Also, Kivy layouts are used to arrange widgets.

Modules are classes that can be loaded when starting a Kivy application. You can use the config file to manage the loading of modules. Also, You can write your own Kivy module also.

In GUI programming, widgets are one of the most frequently used terms that help to interact with the user. Also, Kivy widgets work as an object that receives input events.

All Kivy widgets are designed in the form of a widget tree that contains the number of child widgets or none of the child widgets.

Kivy event is the first to receive a root widget of the widget tree. Also, Kivy sends one per touch when new data is available.

Input events are an essential part of the Kivy architecture. There are different input events contained in Kivy abstract such as touches, mice, TUIO, Mouse, MTDev, and HIDInput.

You can add any individual input event with a 2D onscreen position.

The instance of the touch () class characterizes all the input types. Also, it can be one of the following three states.

You found this tutorial / article valuable? Need to show your appreciation? Here are some options:

01. Spread the word! Use following buttons to share this tutorial / article link on your favorite social media sites.